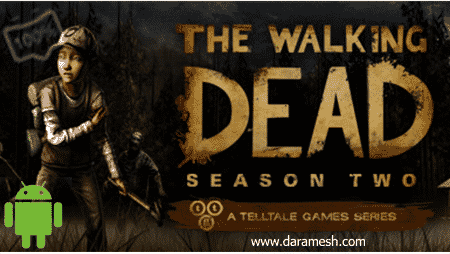 If you have been a regular daramesh user, you know that a long time ago, we introduced a very beautiful and graphic action game called The Walking Dead: Season One for Android, which met with a unique welcome from you, dear users, so that It has been downloaded more than 27 thousand times by you. If you are one of the users who have experienced this beautiful game, you have undoubtedly been fascinated by its unique graphics and gameplay, and you would like to play its next chapters as well, and maybe you have been waiting for the release of its next versions! A few days ago, we saw the release of the second version of this beautiful game from Telltale Games called The Walking Dead: Season Two in the Android market, which was released completely free!! The second season of the game is the continuation of the first season, in which you follow the stories of the main character of the game, Clementine, and entertain yourself for hours.
Today, we at daramesh have decided to put the fully healthy and complete version of The Walking Dead: Season Two game for you at the request of users, and we hope you will like it.
Some features of The Walking Dead: Season Two Android game:
* Winner of more than 90 titles of the best games of the year!
* Designed in full HD with HD characters and animations
* Adventure and perform various missions in amazing places
* Meet a variety of interesting and new characters during the game
* Encountering a variety of extremely terrifying and terrifying zombies
* Having a scary and very exciting gameplay in terrible places!
* Free and quick and easy installation without changing the data files!
If you want to have the full version of The Walking Dead: Season Two on your Android mobile phone, don’t miss this post from daramesh. We suggest not to miss it under any circumstances.
Changes in version v1.35:
* Full version of the game with 5 chapters.